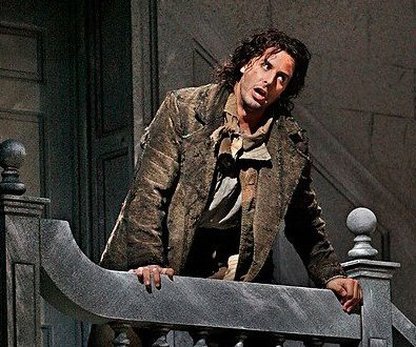 Heathcliff - Wuthering Heights
New York Choral Society and The Mannes Orchestra: For Those We’ve Loved
“The baritone’s role in When Lilacs Last is larger than the mezzo-soprano’s: he is the declamatory voice of both the ‘poet’ and history itself. Lee Poulis’ powerful, expressive voice carried Whitman’s words from the stage to the farthest reaches of Carnegie’s high balconies; his passionate affection for both the meanings of Whitman’s words and their sounds was radiantly clear.”
— Jean Ballard Terepka, New York Theater Scene

An Energetic 'Doctor Atomic' Astonishes at La Maestranza
“Well-timbred voices, plenty of power and perfect diction served … this story of historical realism; and there is something in the music of Adams, in the psychological and emotional life of the various characters, which requires the singer’s involvement beyond mere vocal technique.... Particularly outstanding was … Lee Poulis as Robert Oppenheimer, who gave touching impact in several of his arias, especially in the powerful ‘Batter my heart’ in the second part of the work.”
— Gonzalo Roldán Herencia, Opera World

Doctor Atomic - Teatro de La Maestranza
“Baritone Lee Poulis, embodying Robert Oppenheimer (Oppie), director of the war project, [has a] perfectly produced voice [which] impresses from his first dialogue.... The act ends with the masterful aria of Lee Poulis singing a sacred sonnet of the English poet of the 16th and 17th centuries, John Donne, where Oppie wants to atone to Holy Trinity that allies science with the devil.”
— José Antonio Cantón, El Mundo

A Musical Explosion in Seville
“The Sacred Sonnet, one of the Divine Poems of John Donne … is without a doubt the most beautiful moment of the entire opera, when Oppie sings at the end of the first act, confronting his contradictions.”
— Rosa Massagué, El Periodico

Doctor Atomic – Teatro de la Maestranza
“The complicated role of Robert Oppenheimer is assumed by the young baritone Lee Poulis.... As the performance progressed he dominated the role, the highest moment being the aria that closes the first act, which he sang without amplification. (It’s stated that the voices be amplified at the direction of [composer] Adams himself.) His voice possesses a beautiful timbre and shows a full baritone range.”
— Javier del Olivo, Codalario

“We find very admirable work from baritone Lee Poulis as protagonist Oppenheimer, a role that he has sung previously.... His recreation of the John Donne sonnet at the end of the first act, ‘Batter my heart,’ had all the intensity which the aria demanded.”
— Alejandro Martínez, Bachtrack

“The vocal level was uniformly excellent. Lee Poulis offered an interesting Oppenheimer, carrying his character to the highest level in the most lyrical moment of the piece, the aria ‘Batter my heart,’ where suddenly [composer] Adams seems to embrace Puccini.”
— Ismael G. Cabral, El Correo

“The voices of Lee Poulis (Robert Oppenheimer) [and Kitty Oppenheimer] are of great beauty, having great moments of vocal brilliance throughout the opera.”
— Globedia

Paul Hindemith – When Lilacs Last in the Door-yard Bloom'd
“Young baritone Lee Poulis made a powerful impression, his resonant voice filling Duke Chapel with burnished sound. His top E’s on ‘I mourn’d and yet shall mourn with ever-returning spring’ and ‘With ev’ry leaf a miracle’ in the opening movement rang out splendidly, and his alternations with the chorus in ‘Over the breast of spring’ and ‘O western orb’ were evocative of the lections and responses of a liturgical service.... The understated eloquence of his delivery of the hymn, ‘And I knew Death, its thought, and the sacred knowledge of death’ was potently expressive.... The hallmark of Mr. Poulis’s singing was vocal and sentimental fluency, and his articulate phrasing lent Hindemith’s angular melodic lines an unexpected appeal.”
— Joseph Newsome, Voix des Arts

Baritone Lee Poulis a Highlight of Hindemith Requiem
“The star of the afternoon was baritone Poulis, whose vibrant upper register confidently matched the orchestra’s challenge. He handled the Requiem’s high tessitura with ease and brought drama to the recitative-like passages of the work’s ninth movement, ‘Sing on!,’ with its passages reminiscent of William Walton’s 1931 Belshazzar’s Feast. In the final movement, ‘Passing the visions, passing the night,’ Poulis took advantage of the lighter orchestral scoring, with its dialogue passages between singer and solo flute (Pam Nelson), to demonstrate his lyrical gifts as his voice soared above the instruments. Similarly, Greene’s duet with Poulis brought additional notes of beauty to this concluding section.”
— Geoffrey Simon, Classical Voice of North Carolina

An evening of firsts for the Grand Rapids Symphony: Evolutionary, revolutionary, extraordinary
“No mandolin appeared in ‘Dialogues of Love,’ but accordionist Julien Labro and saxophonist Amanda Heim, plus baritone soloist Lee Poulis, were key players in a work of vast undertaking, inspired by the topic of love in its many permutations, elucidated in texts in four languages spanning two millennium.”
— Jeffrey Kaczmarczyk, Grand Rapids Press

Les Pecheurs de Perles, Fort Worth Opera
"[Nadir] was well matched by the strapping young American baritone Lee Poulis as Zurga, whose voice blended seamlessly with Panikkar's in the great Act I duet. Poulis has both strength and the upper register that Bizet requires of this character. Virile and heroic, in both appearance and vocalism, Poulis played the role of friend and rival with consummate authority; his self-sacrifice at the opera's end was genuinely moving."
— Willard Spiegelman, Opera News

Gem of the Ocean
“Poulis covered the full dramatic range of the role with sure acting chops. He goes from jealousy and murderous rage to devastated repentance and still has to show the command expected of a king (no matter how recently elected). All this is included in his big third act aria, ‘L’orage est calmé.’ You suspect that he has a lot more heft in the lower of his voice than he wisely uses so as to even out his sound top to bottom. And even it is; his control is a rarity around baritones these days.”
— Gregory Sullivan Isaacs, Theater Jones

Fort Worth Opera Festival Begins Well with The Pearl Fishers
“Lee Poulis [as Zurga] matched him [Nadir] with a golden-hued baritone, and they blended magically in their duet.”
— Wayne Lee Gay, D Magazine (Dallas Morning News)

The Pearl Fishers
“As chief of the pearl fishers, Poulis was excellent throughout.… Zurga’s recitative and aria at the top of Act III had great clarity and a sense of intimacy that was highly effective.”
— John Fleming, Opera News

Sarasota Opera: 'The Pearl Fishers'
“Zurga, sung by baritone Lee Poulis, was vocally strong and resilient. His character may change his mind more quickly than a politician running for office but his voice was always there — robust, solid and compelling.”
— June LeBell, Sarasota Observer

"Lee Poulis as Enrico was a fine villain, bringing a commanding presence and secure if lightish baritone to the role of Lucia's evil, calculating brother."
— Lawrence A. Johnson, South Florida Classical Review

Doctor Atomic
"The further the opera progresses the more Oppenheimer, the scientific genius played by baritone Lee Poulis - with lovely voice and film-star looks - reveals himself as a poetic visionary. In his ecstatic, surrealist-sensual outbursts, he sings among other things about God, even though he fears he has sold his soul to the devil."
— Hannu-Ilari Lampila, Helsingin Sanomat (Helsinki News)

"Lee Poulis as Oppenheimer had a firm, metallic baritone, fittingly depicting an intimidating superhuman in a business suit, his desolate character relieved only by a dash of pathos."
— Matti Saurama, Uutispäivä Demari (Social Democratic Daily News)

"American singer Lee Poulis did not play Oppenheimer as a charismatic visionary so much, but he excellently captured his inner tension, his belief in the power of reason and, on the other hand, his sense of the limits of reason. His singing was handsome, and his text was crisp."
— Harri Kuusisaari, Etelä-Suomen Sanomat (Southern Finland News)

"American baritone Lee Poulis gave a fine portrayal of the growing internal conflict in Oppenheimer. His suave baritone was a delight throughout the evening."
— Jaakko Haapaniemi, Länsi-Savo (Western Savonian)

Minnesota Opera rescues Herrmann work
"... Only someone with a heart of stone could resist loving Heathcliff as played by Lee Poulis, a Hollywood-handsome baritone who must be a spectacular Don Giovanni, a role he has played at Sarasota Opera. He's moody, to be sure, but Simonson does not place great emphasis on Heathcliff's origins as a Gypsy foundling taken into the stuffy and inhibited Earnshaw family. And his problems are explained only in part by the social structure of the day. Poulis shrouds him in darkness - that's what makes him fascinating to women (and at some point in the past to the elder Earnshaw who brought him home from Liverpool)."It's clear that Heathcliff is an unlikely candidate for an enduring Mr. Right in any era. He's a complex guy - even when "sanitized" and gussied up in fancy duds. (How he comes to wealth so suddenly is left a secret by Brontë.) Thus it's unavoidable that Catherine Earnshaw will love Heathcliff even after her marriage to colorless Edgar Litton, and that there's no way out of this dilemma for her."
— Wes Blomster, Opera Today

The highs and lows of "Wuthering Heights"
"... Poulis' Heathcliff, while restrained in the first few acts, takes an engrossing descent into madness."
— Andrew Penkalski, Minnesota Daily

Rare staging of opera based on Brontë novel
"Lee Poulis' Heathcliff was a most vivid characterization. He brought a Byronic presence and a dark baritone, rich in colors. He was capable of dark rage, but became all the more engaging in stillness."
— William Randall Beard, Minneapolis Star Tribune

Don Giovanni
"The handsome baritone Lee Poulis was well suited to the role of Don Giovanni with a forceful voice and arrogantly bold attitude. This is a great start, given that his comic foil and servant, Leporello, was sung by bass Andrew Gangestad. Singly and together, these two provided a nucleus of energy from which all others could revolve."
— Gayle Williams, Sarasota Herald-Tribune

"That same sense of depth of character was what made the rendition of baritone Lee Poulis so memorable. Singing Ford's aria 'E sogno? O realta' from Verdi's Falstaff, his singing was exciting, even thrilling."
— Fred Kirshnit, New York Sun